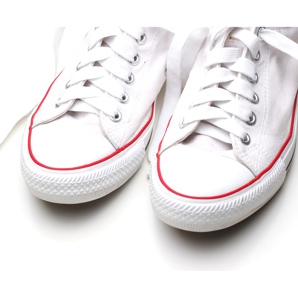 Where did the sneakers come from? The history of the most popular sports shoes


Sneakers are undoubtedly one of the most popular and most-worn shoes. They connect generations and professions - they are worn by rock stars, actors, journalists, bloggers, as well as primary school children. The fashion for the characteristic white soles has been going on in the world continuously for several dozen years. Where did the sneakers come from and what made them so famous?

The sole of the sneakers - their most characteristic element - is made of rubber. Wait Webster first came up with the idea of ​​using this material to make shoes in 1832. His idea turned out to be a bull's eye, so he quickly patented it. A modern solution was used in sports shoes that were eagerly worn by cyclists and used to play cricket. The idea of ​​making real sports shoes with rubber soles hit the head of Joseph William Foster. The founder of a small English manufacture, opened in 1890, saw the potential of rubber. His charisma made small business recognizable, and the Reebok brand is known all over the world to this day.

A star is born

The shoes produced by Foster did not yet resemble well-known sports models. A breakthrough date in the history of sneakers is the year 1908. In the United States, Marquis M. Converse decided to create a pair of sports shoes for basketball players. He designed light shoes reaching above the ankle with a thick rubber sole. Characteristic, white soles and a dark top of the material, plus a star on the ankle - this is what the first All Stars sneakers looked like. The brand symbol has survived to this day. Looking at the shoes, we can recognize in a few seconds if someone has the original, iconic Converses on their feet.

Way to the top

Sneakers led to the heights of popularity Charles "Chuck" H. Taylor - a basketball star. It was he who showed the world the white soles on the court floor of the basketball court. He agreed to advertise Converse after making a few corrections to the original footwear. Then everything happened very quickly. Colleagues and friends, and most of all Chuck's fans, wanted his favorite shoes on their feet. The world of sport set a new trend, which the street quickly followed. Sneakers flooded US cities.

Sneakers in the service of the motherland

The army appreciated the comfort and versatility of sneakers. Boots became a compulsory equipment for soldiers in the 40s and 50s of the last century. It turned out that the uniforms wear shoes with rubber soles also in plain clothes. Sneakers favorite army boots? It was an excellent and needed recommendation for the Converse brand.

Rock'n'roll - sneakers in the hands of subcultures

In the 1950s and 1960s, the shoes found their way to the feet of young people from all over the world, fascinated by new trends in music. Sneakers have become a symbol of the cultural revolution and an important element of the flower power movement. Since then, shoes with a white rubber sole have been completely accepted by music stars. In the following decades, members of the largest bands and soloists founded them for their concerts, meetings with fans or shopping. Kurt Cobain and Axl Rose used to go to Converses in the 90s. Currently, we can see their teen idol - Justin Bieber in them.

Sports shoes were produced in Poland in the 1930s by the Stomil company. Sneakers were the most-chosen footwear for hiking - hence their name: "Tramp" means a wanderer or a rover.

The history of sneakers is extremely fascinating. The thought of how to effectively use rubber soles spread around the world and from Europe went to the United States. Sports shoes from the basketball court quickly became mandatory equipment for the army, and soon became the favorite model of the stars. Today, the characteristic star on the ankle is known all over the world, and Converse is one of the most-worn shoes.