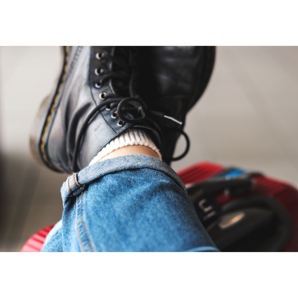 Glany - a youthful look in a female edition?


Glans are associated primarily with youth movements, not entirely women's - quite the opposite. However, boots, as autumn boots, can be a perfect replacement for Chelsea boots or boots that are still too warm for them. Currently, we can see many interesting pairs of these shoes that will attract the attention of every woman. Why?

Glans are associated primarily with youth movements, not entirely women's - quite the opposite. However, boots, as autumn boots, can be a perfect replacement for Chelsea boots or boots that are still too warm for them. We can see a lot right now interesting pairs of these shoesthat will attract the attention of every woman. Why?

When thinking "boots", we are faced with a vision of black, quite large shoes that end behind the ankle, and even higher, just below the knee. Meanwhile, these feminine versions, launched in the fall season of 2018, can win the heart with ... color, print and even a patch.

Boots - not only black, not only white

The female version of boots, i.e. closed-up lace-up shoes, looks more like mountain hiking boots than heavy military boots. Meanwhile, it is the boots that will prove better during a walk on Krupówki than during the march to the peaks of the Polish mountains. Colorful shoes are a hit of the season. You can choose not only black, white or red shoes, but also pink or with prints different, interesting images. In addition, these shoes are not only colorful. They often have various applications that make a woman stand out from the crowd. These applications are really diverse. These can be patches with hearts, skulls, ships, as well as specially crinkled, additional skin that attracts the eyes of everyone.

What to wear boots?

We slowly begin to wear coats and jackets. In this women's edition, the boots fit not only with various types of down jackets, but also with longer, one-color coats. Brass footwear emphasizes femininity, giving it a bit of a needed twist. To make this claw more visible, you can invest in a warm cotton skirt - with boots it will become a great symbol of female self-confidence. It is a good choice for women who appreciate feminine items of clothing, and at the same time do not want to dress only in romantic styles. It is also worth going crazy with the outfit, especially when going to the city - an elegant outfit with boots in an interesting color will work better than sophisticated high-heeled boots.