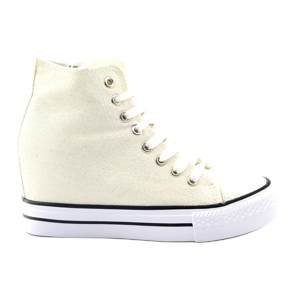 
Have you ever wondered in what shoes people representing different seasons would go? In my opinion, winter would go in emu and colorful Lady Spring would come naturally in colorful sneakers! It is thanks to her magic shoes that every piece of land on which she would put her foot would flourish! Do you agree with me?

The sneakers have a history and it is longer than one would think.

Have you ever wondered what shoes people from each season would wear? In my opinion, winter would wear emu and the colorful Lady Spring would come in colorful sneakers, of course! It is thanks to her magic shoes that every piece of land on which she would set foot would flourish! Do you agree with me

Sneakers have a history and it's longer than you might think.

Rubber soles or the essence of sneakers were patented in 1832 by Wait Webster, however, their production only began in 1980 in Great Britain. However, the first sneakers were made in 1908 in the USA in the Marquisa M. Converse. They named All Star and the product itself was intended for basketball players. The shoes consisted of an immortal rubber sole and a black canvas top. Sneakers are popular in the early 1920s, when Charles "Chuck" Taylor, the basketball star and godfather of another iconic model of sneakers, became Converse brand ambassador. In the 1940s, the US Army ordered sneakers and made them training shoes. Soldiers appreciated the convenience and after the end of service in the army bought sneakers and wore them in their free time. In the next decade, sneakers avalanche gained popularity. They were worn by all representatives of alternative views, musicians and athletes. Wearing sneakers became an expression of freedom, opposition and revolutionary thought. From the '70s, sneakers lost their importance as sports shoes, however, they still gain strength as a synonym of rebellion but also comfort. And then, on April 5, 1994, Kurt Cobain died in sneakers on his feet, and the role of sneakers as an expression of alternative thought, strengthened and took root.

And now it's time for a Polish accent! Did you know that in the 1930s sneakers were also produced in Poland? Yes! In Grudziadz at the "PePeGe" enterprise, where the popular name for trampek-pepegi came from.

Currently, sneakers remain an obligatory hallmark of counterculture representatives as well as modern people living in large cities. You can put on sneakers in jeans, a summer dress and even a suit! Everyone wears them and from birth! They can be white, colored, on wedges, over the ankle or without laces. Which would you choose?

Iconic white sneakers? They fit any stylization and if they get dirty, be sure to wash them with whitening toothpaste! They will be like new!

Or maybe you prefer sweet as hard candy?